Untitled, The Terrible Secrets of the Art World.

This person hit the nail right on the head! I could not have said it better. Ever. I mean, I suppose if you really stretch your mind, anything could be considered art. But that also means that there can be bad art. Not all things are good, so if all things are art, art is not always good. See?

I’m glad I found this post and I won’t hesitate to throw this in the face of every hipster/shitty-self-proclaimed-artist/rich kid I come across in my major. Those chumps need to be taken down a peg. It wouldn’t be so bad if this kind of attitude was restricted to my postmodernism class, but it isn’t. According to the textbook I’m reading, postmodernism is still going on today. We haven’t moved into anything that can be considered a new era of art. The attitude mentioned in the above link is extremely pervasive, and infests the mindsets of most of the profs and art students I’ve come across so far.

Sad. Especially when I read about how postmodernism is focused on “deskilling”. That basically means turning art something any bozo off the street can do. You don’t need skill or talent. You just throw paint on the ground and call it art. Or do laundry and call it art. Sickening.

I got into the art major to make great artwork. But I don’t feel like I’m learning anything. (I touched on this in a previous post). Anyway, I think I’ll just stick with it to get a degree. That’s all college is good for unless you’re planning on being a doctor/engineer/lawyer.

I’m really beginning to question whether I really want to be an art major or not. I don’t know if it’s me or the classes I’m attending but I feel like my love of art is dissipating.

It didn’t start with college however. It’s been a recurring thought for some years now, dating back to my junior year in high school. Back then it wasn’t as bad. I thought, “Once I get to college, maybe I’ll feel like drawing again. Maybe the ideas will start flowing once more of my attention can be dedicated to art”. No dice. If anything, I feel even less like doing anything creative now. I think I’ve hit my stride. All my creativity was used up when I was little I suppose. Now I wish I hadn’t drawn so often back then and saved some of my energy for later years.

I’ve seen and heard advice like, “Just try to take time to draw something every day”. “Draw things you wouldn’t normally draw, get out of your comfort zone”. But I don’t feel like any of that is helping. Drawing/painting/whatever just doesn’t bring the same joy and satisfaction it used to. And now since I’m majoring in the art field, I just have to draw because I’m told to/it’s required for assignments. I’m out of ideas and patience.

The art classes I take don’t help. The students as well as the professors are all such hipsters. They think they’re so “deep” and “philosophical”. There’s just so much emphasis on postmodernist ideals. I’m actually taking a postmodernism art history class, and all of my art classes so far show heavy postmodern influence. Most of my classmates can’t draw to save their lives, and the professors put more emphasis on “concepts” rather than skills. I learned way more by teaching myself to draw than I do in class.

None of these students will ever be great like classical artists. They’ll just be no talent hacks like that Andy Warhol. He got famous off some stupid “concept” that not even art critics could agree on. He couldn’t draw or paint. He just copied popular mainstream images for the most part and acted like it meant something. What a freaking joke. The epitome of a freakin’ hipster creep.

I don’t think I’m cut out to be an artist, but there’s not anywhere else for me to turn either. I’m not interested in anything else. I’m not interested in anything anymore. Which is why I haven’t bothered to change my major. Everything is so boring, art included. Not to mention I’m sure my parents would kill me  for wasting 2 years of college on something I don’t even care about anymore.

The link below goes the tumblog that I found this petition on.
There’s sort of an overview followed by the bloggers thoughts on the matter. The post also includes an audio clip.

The link to the petition (which I’ll repost here) also gives some information on the petition, as well as showing the petition’s progress. [ DC Comics: Hire More Women ]. Please sign if you support the cause. 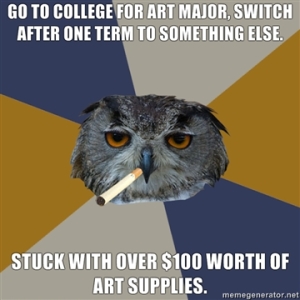 Just as the title of this entry states: yes, art school is bullshit (please pardon my French if you’re reading this Mom).

I’ve only endured college art classes for one year so far and already I’m getting sick of it. I should have seen it coming though, based on my experience in high school art classes. The people who get the best grades most of the time are people who give the professor what he/she wants. They put on the facade about expressing yourself and all this kind of thing, but then during critiques claim it’s not expressive enough.

Here’s a link to a blogger who, I think better illustrates my point because–let’s be frank–I’m not the most eloquent writer:

There’s plenty of other stuff like this out there. Just Google “art school is bullshit” (pardon me again). Art classes are mostly just full of fake, pretentious, angsty, emo wannabes; especially at the higher levels. Critiques especially annoy me because it’s just everyone (the prof included) going on and on about how “visceral” or “etherial” or “insert BS here” the piece is. Especially the types that are into abstract art. It makes me mad just thinking about it. Not to mention you’ll never get a high paying job doing some abstract junk, not this day and age.

But, I suppose I’ll go on taking art classes because I enjoy drawing and painting, and I feel that it’s the only thing that truly interests me. I just can’t imagine myself doing anything else. I’ll just have to become immune to the BS comments during critique and do what I want. The thing is, some of my professors go on about how having a college degree doesn’t even necessarily help you as far as getting a job. But that’s something for another day.

The life of an art student. I can relate to SOOOO many of these it’s ridic.

I never really liked them before, but now I really hate them. Well, not the critique itself so much as the critique-ers.
So, today we were being critiqued on our final project in my college photography class. I came to class with my usual critique day attitude: somewhat nervous about the comments my work would receive, irritated that some comments might be less than complimentary, but heartened by the fact that it would be over soon enough.
But today there was a twist. Rather than posting our work and having a class discussion–where I could choose to withhold commentary, we were to make a written critique on one person’s assignment in particular, then read our critique to the class.
The critique commenced; discussions of the use of light, color, line, the meaning of a particular gesture, etc. I was slightly bored, but still a tad queasy at the prospect of public speaking when my turn came. And come it did. I steeled myself in preparation to bear the collective gaze of my peers, and read what I had written. When, to my immense relief, I was finished speaking, the others were free to begin making comments. There were praises and suggestions for improvement–as I had expected–but one girl in particular got on my nerves.
She had made comments about other projects of mine in the past, most of them rather critical. Let’s just call her “M”. M is sitting across the room from me, blocked from my view by several people. She says “I think the first picture works well, but I don’t get it’s connection the second image…I mean, I guess it just doesn’t make any sense”.
Now, another artist may have taken this with a grain of salt and said, “Well, that’s just her perspective. This project was partially about interpretation after all.” And that is in fact very true. But I didn’t like this girl very much. She always seemed to have something negative to say. I’d also noticed that most of her negative comments were about the art of the black students. That’s not to say she made them solely about the art of the other black students, but I found it happened a bit too often for my liking.
I was immediately offended. “Did you even try to make a connection between the images? This is an art class after all. Maybe if you were a bit more creative you could have made a connection, you snarky little witch.” That’s what I would have liked to say, but didn’t. (Although I think she completely deserved it.) Who was she to talk about lack of connection when, in my opinion, her images were stale and unimaginative? They were more like something you’d see in a cheap tv ad, rather than an art gallery.
I think it goes without saying that I was pretty steamed for the rest of the class period. Call it oversensitivity, but I really think M is a bit racist.